Weddings are a fun affair. Well, I’ll amend that. Weddings are a fun affair for those who attend it and have no part in the planning and don’t take part in the actual ceremony. For those people, it’s a stress-filled event that seems akin to spinning eight plates in the air at the same time. One or more of them’s gonna come crashing down, likely. The priest is late – the wrong food came – the best man was found with the bride. Wait. That one’s like all of the plates crashing down at once. Then there’s a situation like this that’s still adorable after a mess-up.

We see a young ring-bearer. He’s supposedly a year old. He begins walking down the aisle after a bit of prompting. Were I there, I would be worried about the way he’s carrying the pillow ” if the ring is on there, it might be rolling under a pew before very long. He makes it right before the altar – and then the enormity of what he’s doing seems to strike him. ‘Holy moley! I’m helping two people get married! They will be together and eventually make some kids – and I won’t be the cutest anymore!’ With that, he stops and tosses the pillow at the altar. It’s a pretty good throw for a kid his age.

It ends with his father, who is in the wedding party, having to run out and grab him. The audience laughs. But this kid knows – it’s on video now. This will follow him for the rest of his life. He’ll be at job interviews and the interviewer will say, ‘Oh – you’re the ring-bearer who threw the pillow. ‘ In all seriousness, he’ll be able to laugh it off. He was a kid, for crying out loud. Now if he’d acted like that when he was 30 – that’s a different story.

There are all kinds of wedding videos out there – from the absurd, like a member of the wedding party accidentally knocking the bride over into a pool, to dogs partaking in a wedding. This is up there in the ‘cute’ category. I’m sure that the rest of the wedding went off smoothly, without a hitch. Until the DJ showed up drunk. I kid – I kid.

This little boy was such a cutie. C’mon. How silly did you act when you were that age? What’d you think? Tell us in the comment section below. 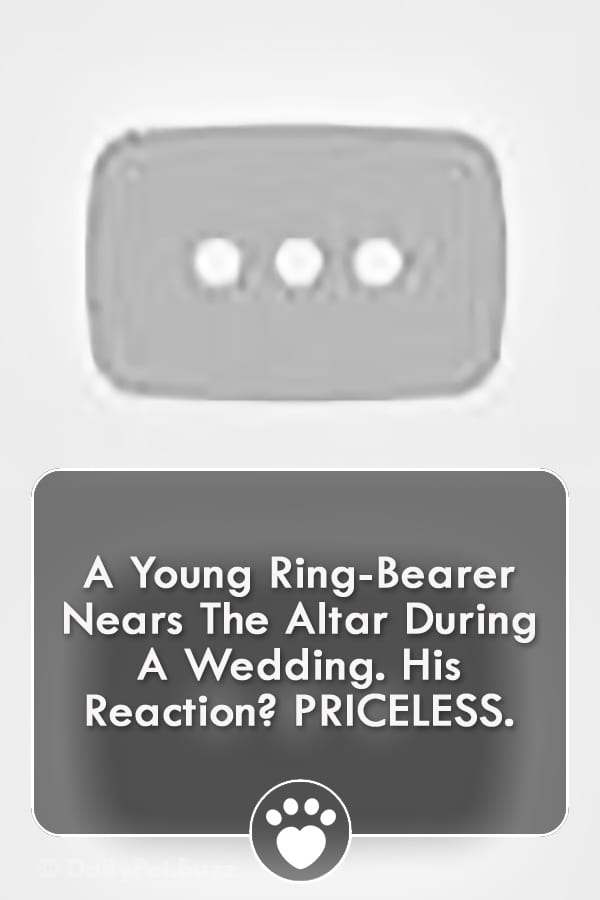