Pit bulls have just about the worst reputation of any breed of dog. Rightly or wrongly, they’re regarded as vicious and aggressive. To some extent, this may be guilt by association: the breed is popular in the world of underground dog fighting and among urban toughs who want an attack dog. Pit Bulls do indeed have large, powerful jaws and that in combination with the “bite, hold, and shake” behavior that they have in common with certain other breeds does mean that when they do bite, the injuries can be serious. A number of jurisdictions have sought to ban or restrict ownership of the breed and insurance companies are exempting pit bulls from their liability policies. Defenders of pit bulls insist that dogs are only as mean as their owners.

To show just how disciplined pit bulls can be, Nina Wahl posted a video of her 4 year-old niece Taysley Rose bossing around six male pit bulls at feeding time. The big, blocky-headed dogs are gathered round her in the kitchen waiting for some delicious kibble. She orders them to sit, and they all comply. She pours out one bucket of kibble and the dogs lean toward it slightly but stay put, as ordered. That yummy food: so close and yet so far! After the little girl pours out a second bucket and spreads the kibble around, she counts to three and finally yells “Okay!” Now the eager dogs finally get to dig in, which they do in a calm and orderly fashion rather than a violent frenzy.

Check out the video we’ve posted below of 4 year-old Taysley Rose feeding her pack of pit bulls. Some animal advocates are expressing concern even though the dogs seem to be completely obedient.

What’s your take on it? Are pit bulls inherently dangerous or does it all depend on how a dog is raised? Let us know in the comments at Facebook and don’t forget to like and share! 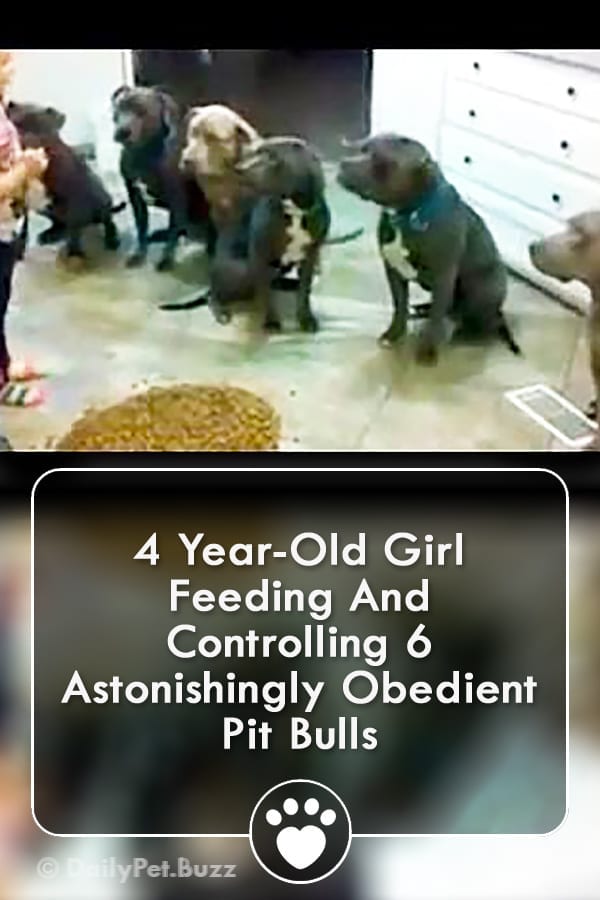