Pet parents dearly love their furry friends and naturally enough, tend to have a protective attitude toward them. Older pets, especially, need a human friend who’s looking out for them. But just how far will a pet parent go to protect their little one?

When Kirk Fetter of Placerville (in the forested interior of Northern California) heard a strange noise, he knew it wasn’t just something going bump in the night. He sprang out of bed, wearing nothing but his boxer shorts, and went out to investigate. His 8 year-old dog Tiki, who had been sleeping on the deck, was in the clutches of an enormous mountain lion!

Kirk wasn’t going to just stand there and do nothing while the big cat attempted to make a meal of his beloved pet. As he described what happened to a reporter from local television station KCRA: “My wife did throw a couple buckets and other stuff that was on the deck at the doggone thing as I was running down there. And she completely freaked out when I was down here because the mountain lion didn’t let go until I was right on top of it.” Tiki suffered some puncture wounds on her head and ear and a cut on her stomach. Since no vets were available in the remote area at that time of night, Kirk had to hand-staple the dog’s wounds himself. He got her to a vet the next morning and the good news is that she was going to be fine.

Kirk had some sound advice for anyone living in mountain lion country: “It’s that time of year. The deer are coming down off the mountains and the mountain lions are following them. So keep your pets in at night and watch your children at dusk.”

It’s a good thing Tiki had a human dad who didn’t hesitate to save her. What do you have to say about pets and wildlife? Let’s hear from you in the comments at Facebook and be sure to like and share! 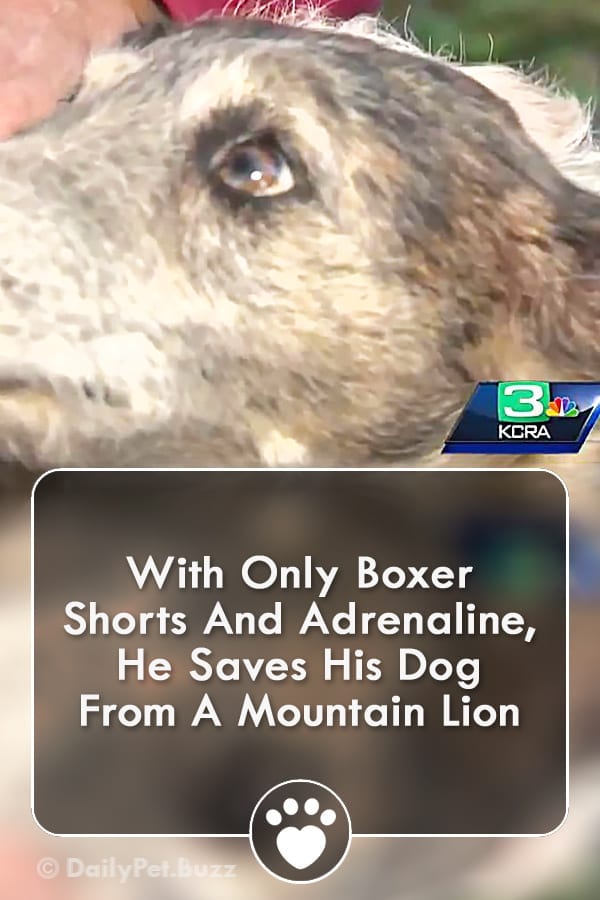