Fighting like cats and dogs. It’s an old expression and almost a cliche: and yet so often literally true. Cats and dogs really do seem to be natural antagonists. Perhaps it’s a clash of personalities. Dogs are nothing if not sociable, the ultimate pack animal. They gladly accept their humans as members of the pack and don’t mind if one of them becomes the leader. By contrast, cats are natural loners. Yes, feral cats have been known to form colonies, sometimes incredibly large ones, but even then, they’re solitary hunters. A cat may love you and be your friend, but unlike a dog, it isn’t looking for a leader. One way to sum it up is that dogs are good soldiers and cats are lovable anarchists.

Different though they are, dogs and cats can be wonderful pets. Some people might like both, others might prefer one or the other. But what about cats and dogs themselves? Can they get along and live together peacefully under the same roof? The answer is yes, but a lot of human-supervised socialization is often required. Don’t expect a relationship of equals, either. Chances are the cat is going to have the dog living in fear of its wrath. It’s all about attitude!

In the video we’ve posted below, you’ll see a cat and dog that seem to be getting along pretty well. In something of a role reversal, the dog is asleep and it’s the cat who wants to play. The gray tabby is determined to wake the dog up and tries head-butting, touching the dog’s paw with its own, and then pawing at the dog’s head and ear. After the cat rolls over in frustration, it curls up near the dog’s face and gives its shoulder a few pokes. Still, the dog refuses to wake up. Naturally, the cat now drifts off to sleep! 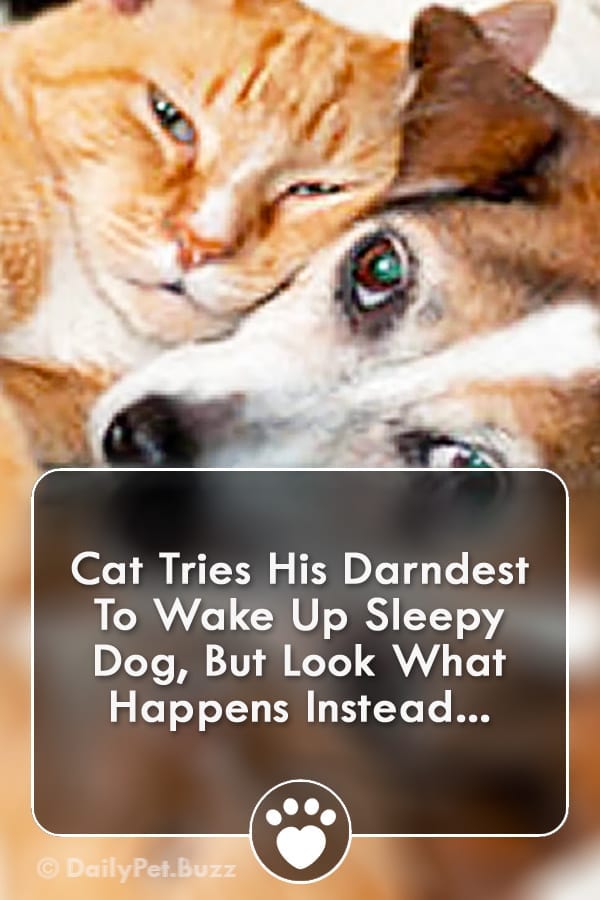