Here I thought that my two cats could be the most annoying creatures on the face of the Earth when I’m trying to watch TV on the sofa. They team up to vie for my attention. One of them is a lap cat – within 10 seconds, mostly less, he’s on the sofa and then my lap. The other one jumps on the sofa and lays behind my shoulders/neck area and bonks my head with hers for attention. This makes watching anything on the screen difficult, at best.

The dog that’s featured in this video, though – makes them look like rank amateurs. We see a St. Bernard named Shasta walk to a sofa where her daddy has cued up ‘Star Wars: A New Hope’ and is ready for an evening movie. Not so fast.

First, she puts her front paws on the sofa, trying to get his attention. Next, she licks his face – which is more like her completely cleaning it. Daddy gets her to lie on the sofa next to him. She won’t be so easily swayed and keeps licking him while he tries to focus on the opening crawl.

Finally, she lays down and puts her massive paws on his chest. Like many of us on movie nights, though, she then fell asleep nine minutes into the film. This pooch starts twitching as she’s dreaming. It’s adorable to watch her in action. Finally, he wakes her up, and she moves over to a recliner that’s set in the ‘recline’ position, and she falls asleep for the night.

Ironically, the beginning of the video has a ‘Star Wars’ – like opening crawl: This is what I go through every time I want to sit and watch something on TV or a movie. I thought that was a cute nod to what he was going to be attempting to view during the video. He was being so patient with Shasta, too. She’s done this quite a few times before, for sure. He just happened to get it on video this time. What an adorable dog. 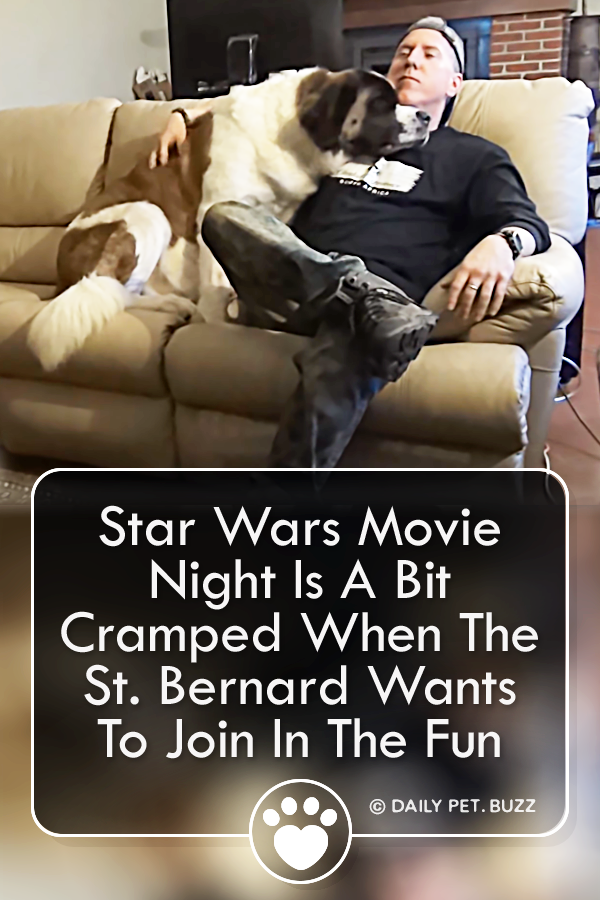