It’s always a tricky situation when you’re out and your dog doesn’t want to go home. The situation might be a little easier to rectify if the dog is a small one, but if it’s a large one – the embarrassment potential can be as high as having a screaming toddler in the middle of a store. You need to be firm, since showing that a dog is the boss is not the best look for you. So, watch this video and take a lesson from this daddy of a stubborn dog.

A man is in a park with his golden retriever. The daddy wants to leave, but the doggie wants to stay. This is a big pooch, too. He’s going to be hard to move if he doesn’t want to. Daddy is a big man, too, but he might get a hernia trying to get this dog to budge. The dog lies on his back, pretending to be dead. It’s not a very good impression, I have to say. The daddy doesn’t even have to hold a mirror up to his face to make sure he’s breathing.

He tries again, playfully pulling the dog into different positions to try to get him to stand. He’s not being rough with the pooch. Nope, the dog is still a rag doll. He does NOT want to leave the park. Who can blame him? It’s a beautiful day and it looks like there are a lot of other dogs milling around. Maybe the dog has his eye on a female dog and wants to ask her out on a date. That’d be a good reason to stay –

I have to say that this daddy has a LOT more patience than I would. At some point, I’d be hissing, ‘C’mon! Let’s go!’ He’s just like, ‘OK. You’re going to have to get up, eventually. I can outlast you. I’m patient. Even more patient than you can be.’ Eventually the dog realized that he’d had his fun and it was time to go. Both of them looked so happy as they walked off along the park.

This would have been so much easier if it had been a smaller dog. Daddy could have just picked up the pooch and carried him under his arm. Have you had any problems like this with your dog? What did you do? Tell us all about it in the comments section! Also, feel free to ‘Like’ us on Pinterest. 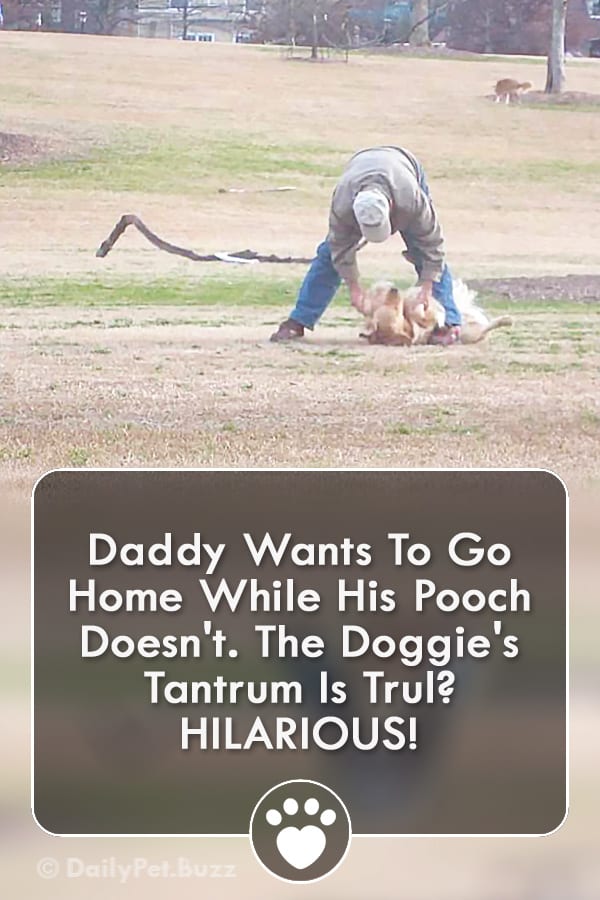