It feels like we’re living in a nation that’s progressively getting lazier – both intellectually and physically. People look for shortcuts for anything. Oftentimes they are driving instead of walking from place to place. It’s one thing if you live in a rural or even a suburban place. Not so if you live in a city. I’ve seen people drive three blocks away. Then they complain later that they are out of breath. I’m sure that some people who watch this video will think the pooch here is smart and not lazy.

A dog named Sunshine is riding on top of a large tortoise named Nicholas. He’s basically her chauffer around the yard. Maybe she thinks that the yard is made of lava and only Nicholas can withstand the heat to carry her around. There is also the strong possibility that she’s just really lazy and is thankful to have a big strong tortoise like Nicholas around. Whatever the case, it’s fun to watch.

I wish I could breed even larger tortoises than this. Starting up a company where people can use ride giant tortoises to wherever they are going. Sure, they’d have to leave for work about 4 hours earlier than usual, but they would be riding giant tortoises, darn it! Yes, if there were a lot of them out there, there would be even worse than usual traffic jams. OK, OK. I’m going to cancel my appearance to pitch this on ‘shark Tank’ –

The thing that gets me is that Sunshine is so lazy that she just stands on his sheck while he’s eating in the middle of the lawn. Let the tortoise eat in peace! Instead, she’s just staying there, probably annoying him, even though he’s too polite to do anything about it. She could hop off and walk somewhere – the yard is not THAT big. OK, maybe I’m reading too much into this. Still – they seem to enjoy each other’s company.

Wouldn’t you love to have something like Nicholas around to carry you from place to place? Tell us what you think in the comments section! We’d love for you to ‘Like’ us on Pinterest, too. 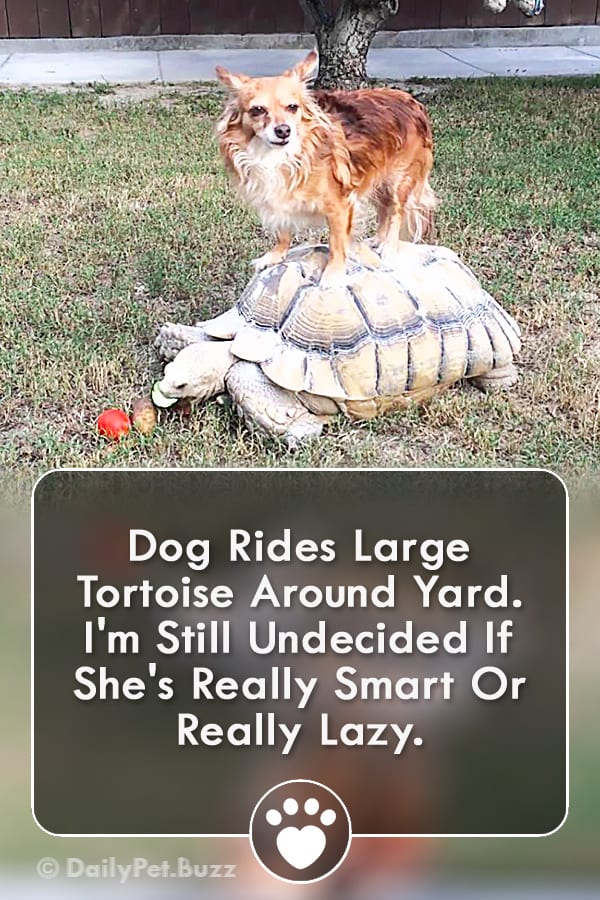