It’s a sad fact that every day people abandon dogs, cats, and other animals on the street. The reasons vary from person to person. Sometimes there’s a big move, and they can’t take the animal with them. Other times it’s because a new member of the family is introduced, or the animal they got just isn’t working out for some reason. Sometimes, animals are abandoned out of malice. Whatever the reason, it results in these sweet creatures struggling to survive. Many of them don’t make it. The video above is a heartwarming story of one dog who got a second chance at life.

One day just like any other, a man was walking down the street to catch the bus. When he turned the corner he saw something, but at first glance couldn’t figure out what it was. As he got closer, however, the full picture on front of him came into focus. This huddled mass was a street dog, covered in mange, her exposed skin dotted with rough scabs. He knew he couldn’t just walk away and leave the animal to suffer, so he abandoned his bus and knelt down to help.

He pulled a treat out of his pocket and offered it to the dog, in order to show that he could be trusted. She gobbled it up instantly, but she’d been through so much trauma that it was going to take a lot more than a snack to earn her trust. Still, he knew he had to do something, and soon. He laid a warm blanket over her, then tried to bundle her up to carry her to the local shelter. She was skittish, and tried to escape, but he managed to get a good grip on her, and ferried her away to safety.

At the animal care facility, the staff doused her in medicated lotions and looked after any other issues that had arisen during her stay on the street. Slowly but surely, they nursed her back to health with love and plenty of food. Her transformation after just six weeks is miraculous!

Check out this moving video above. What did you think? Leave us a comment, we’d love to hear from you! 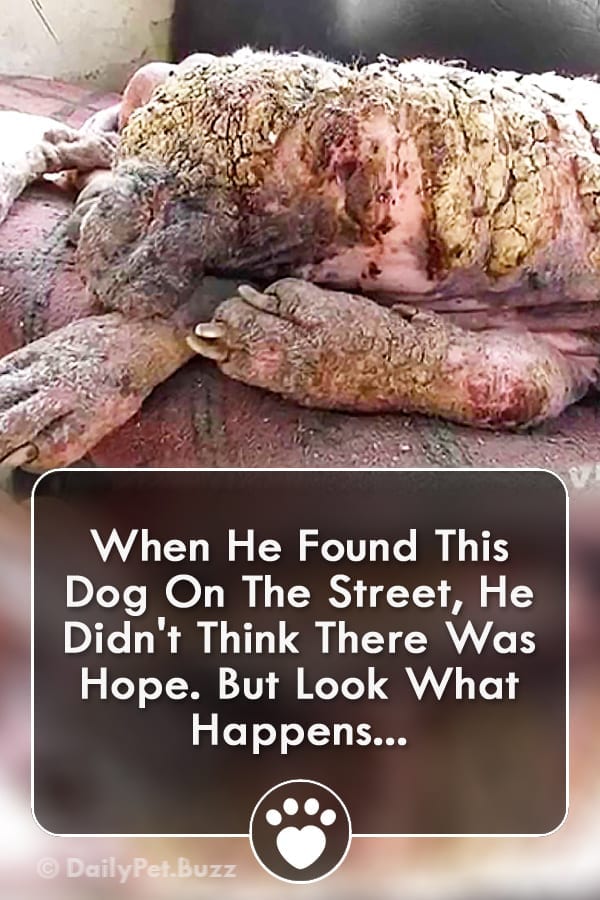