Nothing tickles my fancy more than seeing odd animal friendships. I’m talking more than just having dogs and cats hang out. That’s becoming old hat these days. No, let’s dig deeper than that, shall we? I want to see the most bizarre pairings ever. In the past, I’ve written about elephants and dogs. That’s pretty cool. Elephants and ostriches. Even better. But this video about a bear and a cat? AWESOME.

The people at the Folsom Zoo noticed that a feral cat made her way into the bear exhibit. Rather than immediately becoming bear chow, she became fast friends with a particular one named Sequoia. Given his immense 550-pound frame, it’s a fitting name. It might be also due to his not really wanting to move from one certain spot. The staff, after seeing the cat repeatedly come back, dubbed her Little Bear.

Little Bear has zero fear of Sequoia. She rests very close to the giant ursine. Maybe she trusts her cat reflexes to get her out of any danger should he turn on her. She might just be so old she doesn’t really care either way what happens. Sequoia is also an older bear, so he might just want to save his energy for important things – like scratching himself. It’s all about priorities when one is older. Then again, he might just like her.

The visitors must get nervous about this on a regular basis. The ones that were interviewed for this video were CERTAIN that Sequoia was going make a little snack out of Little Bear. That’s not going to happen, since it looks like both of them are too lazy to even think about fighting. Why fight when they can just lay in the shade together? I think that other warring factions should watch this video ” they might even learn to get along with each other.

Isn’t Little Bear so cute? I have to give him credit for his bravery. What do you think? We’d love to hear your thoughts in the comments section. Also, we’d also love it if you ‘Like’ us on Pinterest. 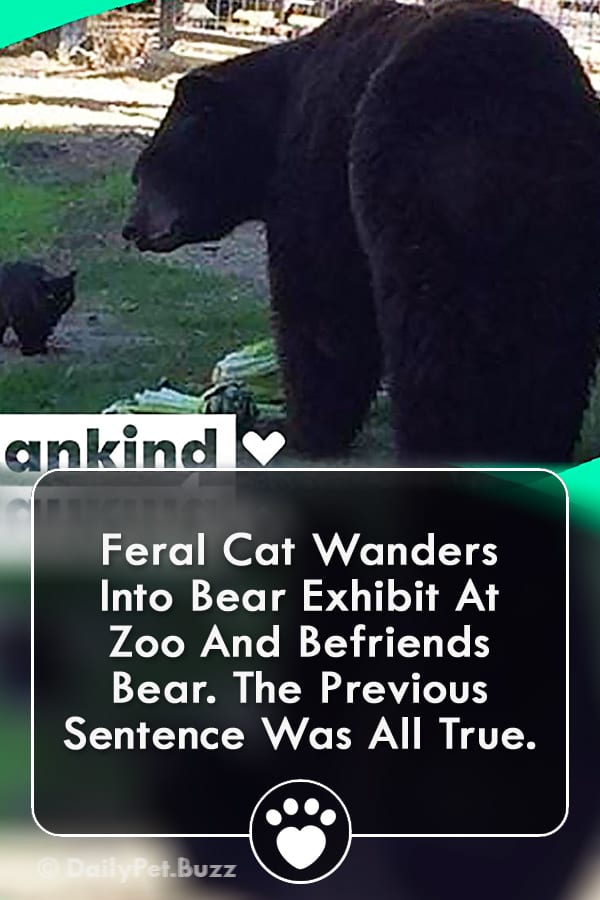