There are times when it can be so much fun to just let your dog be a babysitter for your child. They can both keep each other occupied for a good amount of time, just playing with each other. Of course, this doesn’t mean that you can just walk out of the room and leave them alone with each other. You wouldn’t do that, right? Right? OK. Just checking. Here’s a great example of a dog and a baby playing.

We see a German Shepherd in a dining room. A baby boy is lying on his back on the floor. The dog has a squeaky toy and he loves the sounds it makes as he bites on it. So does the baby, who is laughing loudly, and the two of them are having a grand old time. There’s nothing more each of them would want to do than just play. Of course, their mommy is sitting there filming the whole thing, mere steps away.

It’s almost like the dog is starting to try to teach the baby how to play keep-away at a very early age. ‘Now I’m going to show it to you – you can reach for it – . I’ll pretend to let you have it – PSYCH! Oh. You can’t reach that far anyways. OK, it’ll be more fun when you’re a bit older, I promise. Still, you’ll get the idea about it before you say your first word – ‘ He’s doing his best to entertain the baby ” perhaps his stand-up comedy routine fell flat.

Some thought that the dog might have been showing hunting skills by trying to ‘kill’ the frog toy in his mouth before giving it to the baby to eat. That would be sweet and all, but the taste of plastic just isn’t that appealing. At least not to me. Also, some thought that the mommy was not doing the right thing by having the baby with the dog. She was in the immediate vicinity and they were obviously familiar with each other. Sometimes we just need to relax and enjoy some things.

What did you think? Wasn’t that adorable? I don’t know who was cuter – the dog or the baby. Let us know your thoughts in the comments section! Also, please ‘Like’ us on Pinterest. 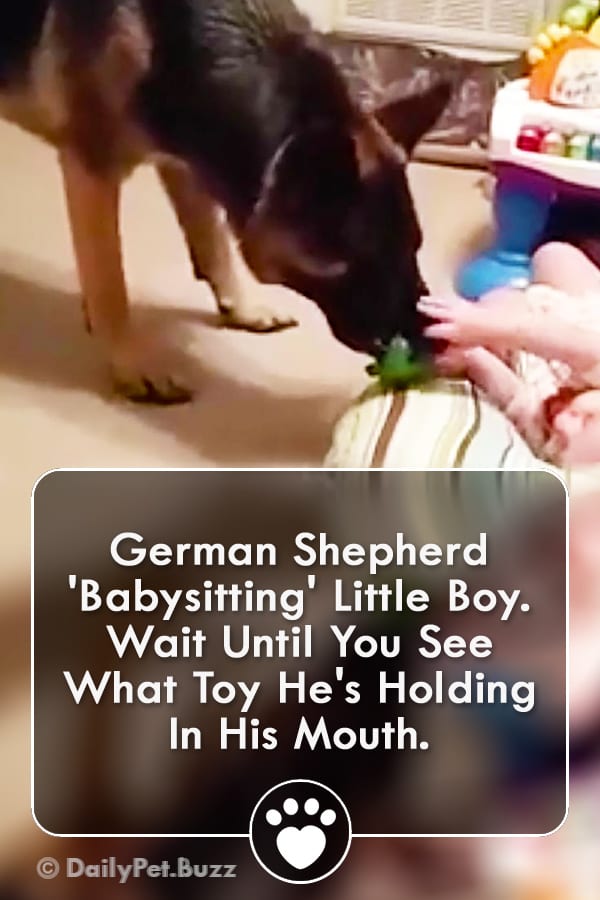