There’s something about watching races, either horse, dog or even humans. There’s a different smell in the air as they get ready to take off as fast as they can. Time alternately seems to speed up and stand still. The viewer can seemingly see every grain of dirt or dust that’s kicked up as the competitors make their way around the track. It’s very visceral and the end can either lead to a primal scream or anguished wail. The dog in this video, a large poodle, proves that.

This poodle reminds me of me watching some sports events. He’s on the other side of the sofa, both front paws on the leather, rocking back and forth with excitement as the horses race around the track. It’s clear, he’s got a favorite and he wants that horse to GO. ALL. THE. WAY! His nervous energy is palpable. It really wouldn’t have surprised me to see a cell phone or laptop next to him, tracking the results.

You can almost hear the dog barking stuff like, ‘GO! GO! WHAT ARE YOU, A SLUG? MOVE!’ It’s clear that he’s into the action. Who knows if it’s the actual horses running or the excited tone of the announcer that has him so excited? Who cares? He’ll fit in just fine at an actual horse race, with the way that he gets so excited. Given the ridiculous hats that some of these attendees wear, they wouldn’t blink at a poodle .

I doubt the dog actually comprehends what’s going on, but then again, it’s a possibility. They can be a lot smarter than we give them credit for. It wouldn’t surprise me to see the dog on the phone after the race. ‘What? No. I said NUMBER EIGHT! You thought I said I just ate? YOU FOOL! I’m gonna bite you when see you next – hello? Hello?’ Hopefully there will be more videos like this of him.

You would have thought this doggie had lost a lifetime supply of treats here. The only thing missing was his chewing up his betting slips. Wasn’t this funny? Leave a comment below! 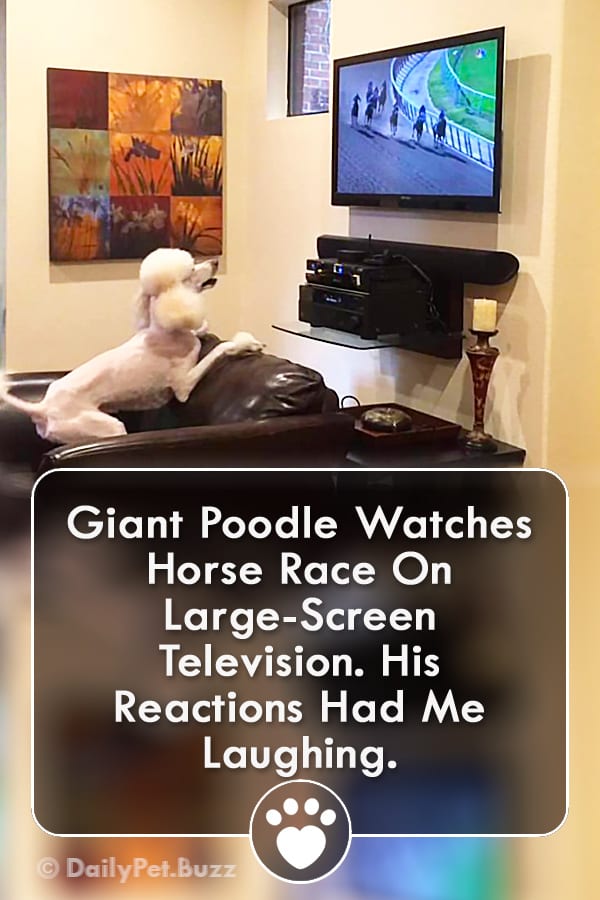