There are a lot of viral videos out there featuring animals, particularly dogs. As well as they should be ” canines are usually exuberant and show off wonderful personalities, which plays off well on the screen. Yes, cats can be fun to watch too, but there’s just something about seeing them excitedly panting and being eager to please their mommies and daddies that make them so enjoyable to watch. Like this one here of a cool dog.

We see Mosley, a pretty large greyhound on his daddy’s bed. He’s looking at the camera and doing some kind of bark where he jerks his head forward and makes a sound that sounds almost like a whispered ‘HEY!’ He’s got something to say and he’s glad his daddy’s there to record it for him. He probably just wants attention. Who can blame him? This is an adorable dog who deserves attention.

Not only is he doing his ‘Hey’ -type bark, he also spins around feverishly on the bed a few times. This is his way of saying, ‘I wanna play! Play with me!’ After seeing that, I’d be patting him on the head until the cows came home. This is a very short video but it does a great job of capturing his personality. He’s a goofy pooch and he’s not afraid of showing it to his daddy. He’s got quite a few videos on his channel.

Mosely is an Internet sensation and after watching the video, I can understand why people love him so much. He’s an awesome, friendly dog. Most greyhounds that I have seen are usually on the quiet, docile side. Not this pooch. He’s friendly and he wants people to darn well know it. The spins add the element of zaniness to him. I’d definitely want to pet him if I got the chance to meet him.

Wasn’t Mosely so fun to watch? I thought so. Have you seen anything else like him? Tell us all about it in the comments section. Also, we’d love it if you ‘Like’ us on Pinterest. 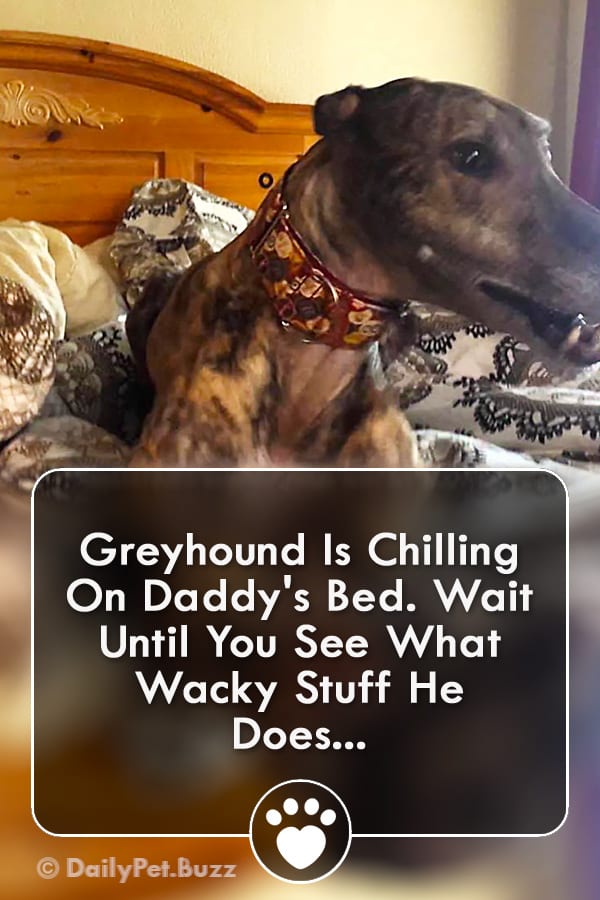