Horses are big, strong, intelligent, and sensitive. They’ve also had a huge impact on human civilization since they were domesticated about 6,000 years ago. Horses were used for transportation and in warfare, but it was their role in agriculture that helped change everything. In much of the world today, horses no longer play such a big role on the farm, but they’re appreciated for their own sake and even kept as companion animals.

Not all horses are so big. Miniature horses are generally no more than about 3 feet tall. They were first bred back in the 1600s. The lucky ones served as pets for the nobility while others found themselves working in coal mines, something that lasted well into the 20th century. Miniature horses tend to be friendly and to like people; today they’re kept as pets and therapy animals.

One fine day, a miniature horse named Pippin was out for some exercise. He was happily trotting along a road with picturesque farms on either side and beautiful mountains visible in the distance. Pippin arrived at a farm with a whole herd of (full-size) horses and some of them came to the fence to have a look at the visitor. These horses were friendly but utterly baffled: this is clearly an adult horse, but they must have been thinking, ‘Woah what’s up with this tiny dude?” They offered some horsey greetings through the wire fence and then the full-size horses stuck their necks over the fence so they could get an even closer look at Pippin. Some more horses came over, too, and all of them were bemused by their new friend, only 31 inches tall.

We’ve posted a video that Pippin’s human dad made. As he aptly described it, “Pippin, a miniature stallion, meets a herd of horses and falls in love. Their interaction is so gentle and very adorable.” 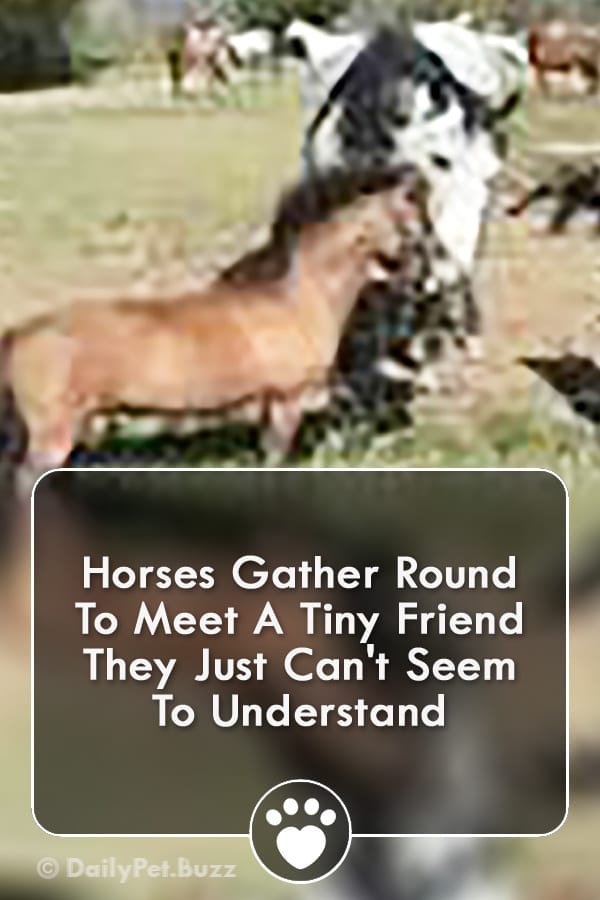