You think children are the undisputed champions when it comes to temper tantrums? Guess again. Pets can be just as bad as people. Dogs especially. Just for giggles, I did a YouTube search for ‘dog tantrums’ . 422,000 results. That’s a lot of tantrums caught on film. Canines can be just like little children, except they will never grow up to be self-sufficient and get a job. What they can do is still be adorable even when they are whining up a storm. Like this video here.

Lily is a boxer – who is quite unhappy at the moment. Her mommy is not giving her what she wants and she is letting her know of her displeasure. It’s not the same thing that happened in a previous video ” she knocked her ball off the sofa and she was too darn lazy to jump off for a second, pick up the ball and then jump back onto the sofa. Hey, YOU try explaining logic to a dog. No, this time the ball is on the sofa.

Mommy is not giving in despite Lily beginning to go to Level 11 in Pout Mode. What’s Level 11? She reaches that for an extra bit of oomph. There’s an added level of whining and whimpering. Still, Mommy is not budging. This is at a standstill now. Finally, Lily does seem to realize that she’s losing this battle and jumps off. Good. If Mommy had given in, then she wouldn’t have had a leg to stand on next time.

I will say that Lily’s mommy made a good choice zooming in on her dog’s face ” it really showed her emotions. It wouldn’t have had the same funny effect if it had been a wide shot. Yes, I think about things like that when I watch movies and TV shows. I guess it carries over to my YouTube viewing. Don’t make me throw a tantrum defending my own views about this video. Oh – you’re going to make me hold my breath now – .

Have you had a situation like this with your pooch? We want to hear all about it. Just head on down to the comments section. Please ‘Like’ us on Pinterest, too. No tantrums from us! 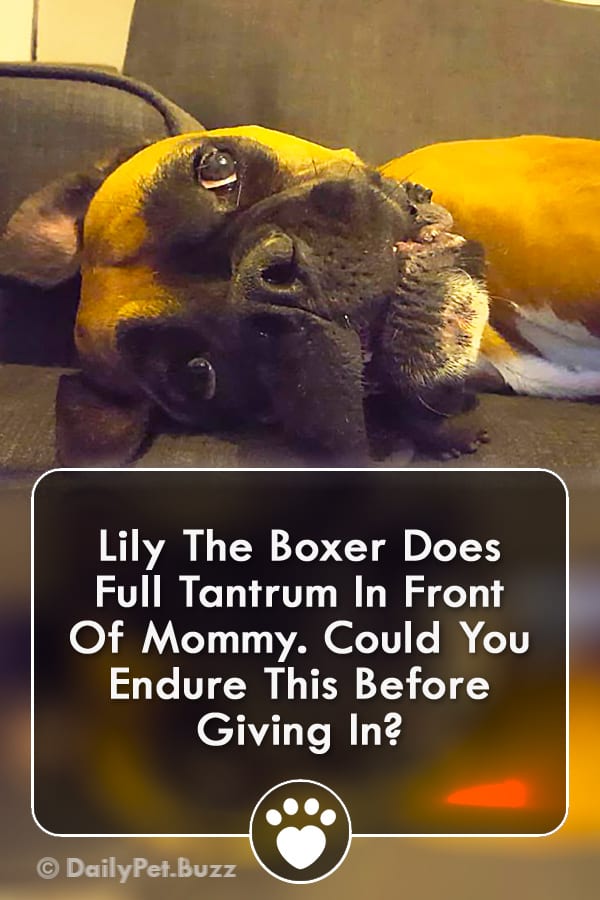