Humans have a very large capacity to treat animals well. We love them, especially sitting on a sofa and having a dog or cat on our lap. It makes all of us feel blissful. Unfortunately, there is a very dark side to some people. They see nothing wrong with treating animals with no respect whatsoever, not caring what kind of suffering they endure in their short, painful lives. On the flip side, there are those who want to save those animals ” like the one man that appears in this video.

We see Christian, a rescuer who lives in Austria. He leads a nighttime rescue operation to a large shed where there’s at least 15 or more bulls, lined up next to each other. They are so tightly constricted that they can’t move. Christian is going to go to one of them, a bull whom he dubs Bandit and begins stroking his head. This bull, who has likely never received affection of any kind is overcome with joy. Christian undoes the tether, and opens the area for Bandit to come out.

When he’s freed from his horribly confining stall, Bandit is literally leaping for joy. He rubs his face in the hay and he can’t stop licking and rubbing up against Christian to show his gratitude for what the man has done. He willingly lets himself be loaded into a truck, where he’s taken to the Gut Aiderbichl sanctuary, where he has a stall that’s like a mansion compared to where he’s been. The bull now adores Christian – as well as he should.

There was some concern about Bandit’s other stable mates who were still tied up when Christian led the bull out of the area and into the truck. It turned out that all of them had been rescued. This must have taken all night, with the rescuers going back and forth, bringing each one aboard the truck. I’m sure many, if not all of them, wound up showing Christian the same gratitude that Bandit did.

Christian and his sanctuary have saved many animals from these inhumane conditions, but unfortunately, he can’t save them all. Have you heard of anyone similar in your area? Let us know in the comments, and also ‘Like’ us on Pinterest. 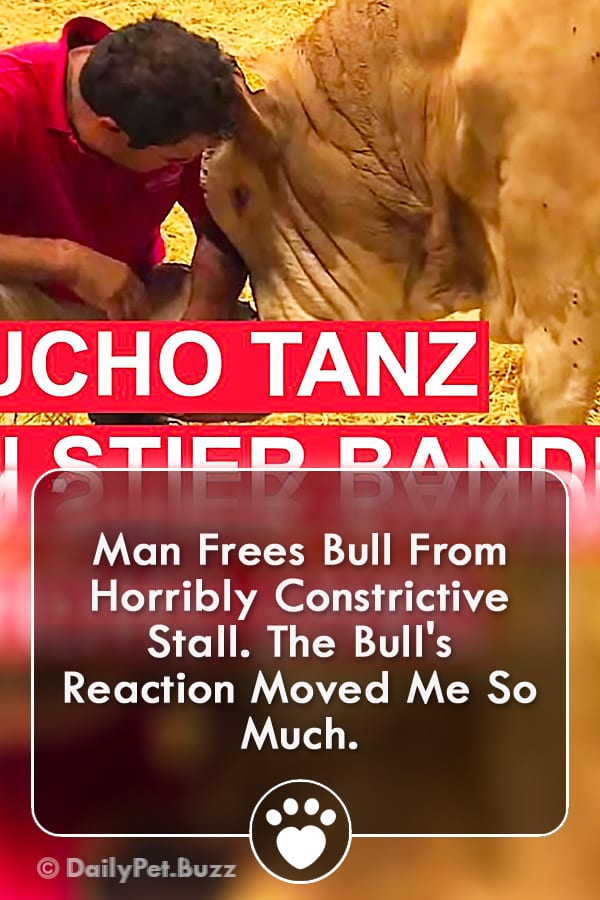