When I was little, I wanted to be a cameraman. Ok, not only a cameraman but a policeman, firefighter, astronaut, scientist and many other professions. Despite that, being a cameraman was one of my favorites. I could see a couple of them in old shows that I watched. Shows nowadays do a very good job of kind of hiding the cameramen and their recording sequences. Shows back when I was a kid didn’t really care if they appeared. In fact, some of the cameramen even interacted in a more active way in that time.

That doesn’t mean that a cameraman’s job is an easy one. They must hold it together when they are filming. I’ve seen those guys and they get the job done through snow and rain. The correspondent might be reporting under an umbrella, but pretty much every time the cameraman is there, he will be standing in the pouring rain with a small umbrella which barely protects his equipment.

Other times, cameramen go through some hilarious experiences. One day, a camera crew was on assignment to film an interview with a horse breeder. This would take place in Santiago, Chile. The interview was for a show called ‘Born to Explore with Richard Wiese.’ The show sounds interesting and fun, right? Filming in such a relaxing atmosphere would make a very nice assignment which would feel like a mini-vacation. For cameraman Greg Harriott, his day was anything but boring. Soon after getting there and starting to work, he found himself the object of someone’s affection. The funny thing is that ” that someone just happened to be a horse.

Harriot took his place as the cameraman and started to get the perfect shot. Shortly after that, Chunchun the horse decides he also wants to be on-camera. Chunchun is in the stall located behind where Harriott is filming. Chunchun seemed to be quite fond of Harriott and couldn’t help touching him each time the cameraman was nearby.

Harriott tries to remain very professional. He has many hours under his belt and is very confident in his experience, but he can’t help but laugh at the horse’s affection for him. The producer is filming the entire event as it happens. For him, it was just a funny perspective. As professional as everyone wants to be, they cannot help but burst into laughter at the whole incident.

The horse seems to love being cheek to cheek with the cameraman. Greg Harriott is trying his best to keep his composure. The horse is very loving and is just trying to show that to Harriott but unfortunately, this is turning out to be very distracting for the cameraman. Click on the video to see the hilarious conclusion! 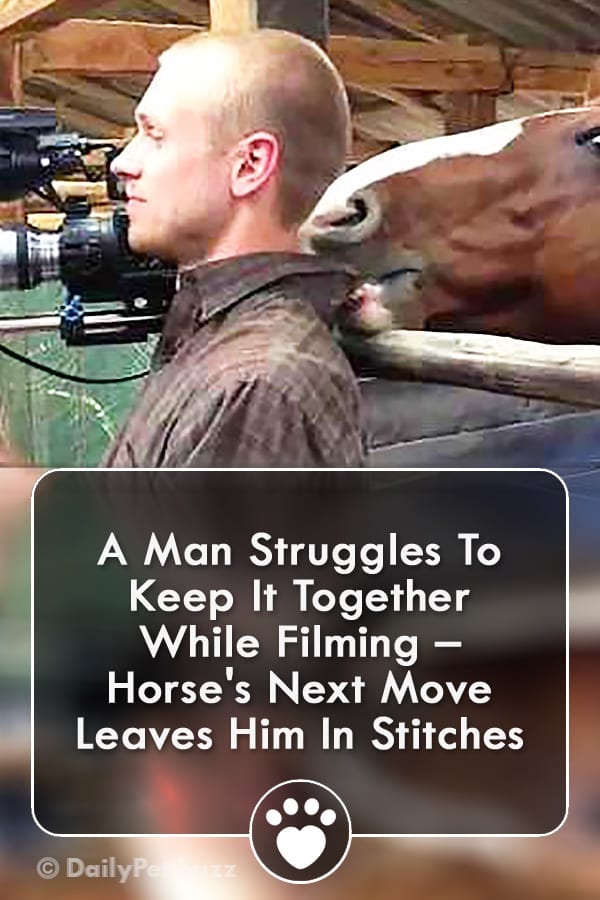