It’s true: Pets can be downright nasty to each other. My cats are a perfect example: My older male cat will be downright disrespectful to our younger female cat. He’ll go over to her dish as she eats and stare at her until she backs off and then he eats some of her food. I’ve tried to get him to stop, but it’s to no avail. He just does it again and again. Speaking of food wars, this video involving a parrot and dog is must-watch.

The video starts with a parrot eating from a container of yogurt that his mommy gave him. He’s having the time of his life – until a Pomeranian realizes that he likes the yogurt too. The dog snatches it out of the parrot’s mouth and makes off with it. As Sherlock Holmes likes to say, ‘The game is afoot!’ Now we’re about to see a battle of wills between a parrot and a dog. It’s more entertaining than a lot of stuff out there.

The dog’s lucky. If the parrot REALLY wanted to be a jerk, he could just bite his tail to make him drop the yogurt container. Instead, he just shadows him until he sees an opening and grabs it from the pooch’s mouth. Of course, the dog is not one to give up at first, so there’s a little tug of war. Though it seems to finally sink into the dog’s brain that he’s bigger than the parrot and has the advantage of a larger head that he can sink into the yogurt container. Dog 2, Parrot 1.

This has the feel of one of those nature shows where the cameraman lets everything play out. It would be easy for the mommy or daddy to step out from behind the camera and ensure that the parrot gets to finish his treat. Nope. Survival of the fittest, baby. It’s lick it all up at once or lick nothing in that household. Though I’m not sure how Charles Darwin would feel about watching this one –

This was such a cute video! What did you think? Be sure to leave a comment below! 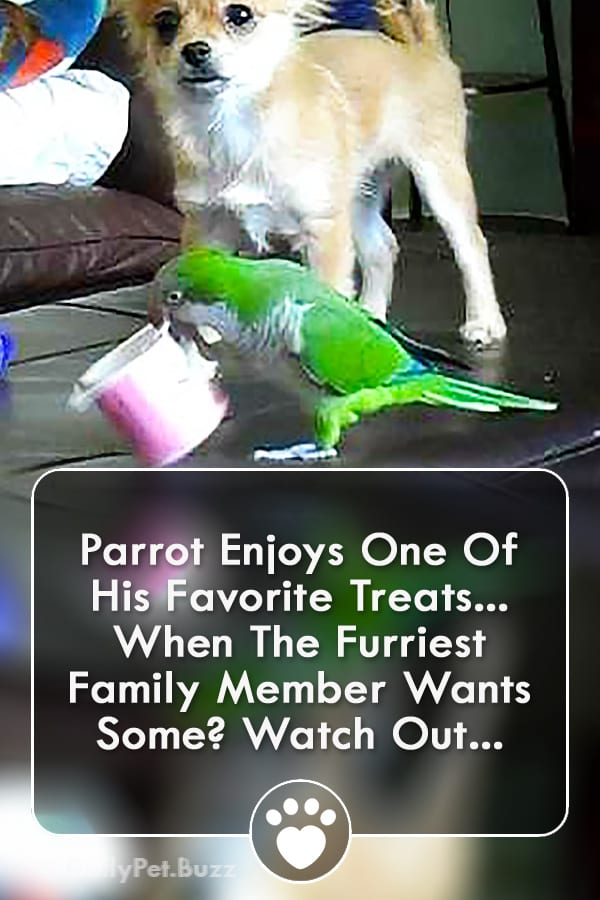