Being a street musician is hard ” you have a very transient audience that only sticks around for snippets of songs, if that, before they head off to wherever they have to go. Some countries treat these artists better than others, but it’s a job where you’re at the mercy of people’s whims and how willing they are to open their wallets. This video shows how sometimes cool things can happen to a street musician.

There is a street busker playing guitar on a sidewalk in Malaysia. He apparently was about to close up shop when he noticed four kittens watching him play. Chances are that they are the best audience he’d had all day, so he continues playing. The quartet of fuzzballs don’t move an inch during the whole performance. It’s almost like they are in a trance from the music. They are still there when the video ends.

Throughout the video, the four kittens sit near his feet, looking up at him with rapt attention. A couple of them seem to be bopping their heads along to the music, although that might also just be due to the jerkiness of the video, which seems to have been recorded and then run through several satellites to maximize the most sluggish video quality. Still, it’s a blast to watch these kittens enjoy the music.

Chances are that they thought the human with the strange instrument that made soothing sounds might also decide to give them food when he was finished. I wonder if they just retreated back to where they had been before he started playing. I’m also disappointed that people didn’t immediately start filling his guitar case with money after they saw the kittens. I guess they thought the kittens were part of the show.

Have you seen something similar happen to a street musician? Tell us all about it in the comments section. Please ‘Like’ us on Pinterest, too. 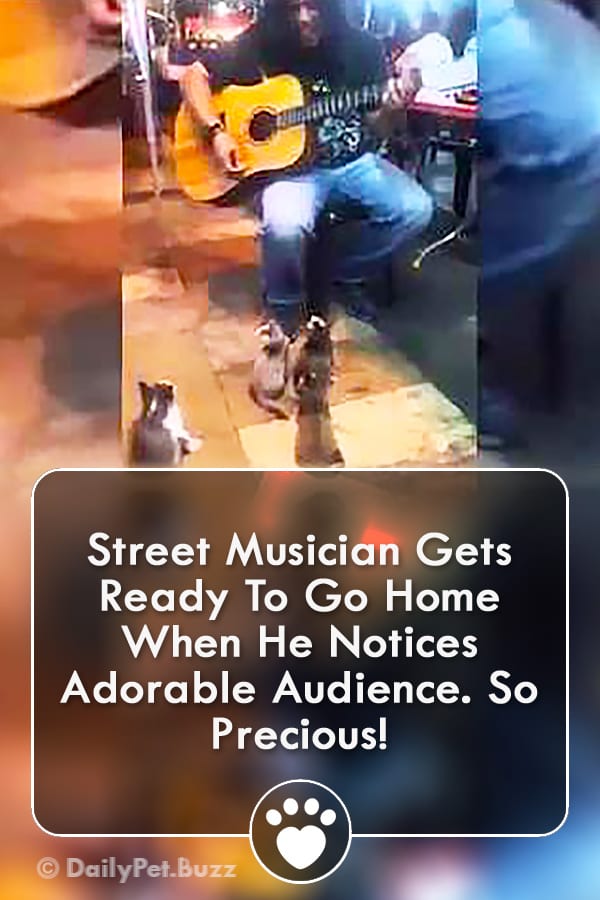