Training dogs to do certain things is necessary if you’re going to have them serve certain functions. It’s important to have a plan when it comes to training ” otherwise it will become a disorganized mess. To see what I mean, watch this video, which features the latest group of pups who were sired by the world’s largest pit bull, appropriately named Hulk, is so much fun to watch ” I didn’t want it to end.

Swimming is an important thing for these dogs to learn, since they will be family dogs. Training starts early, with Marlon and Lisa wanting them to be strong swimmers by the time they are three months old. It’s not like they just take the pups and dump them into a swimming pool and sort it out – they have a precise step-by-step way to train these dogs to unleash their own Ian Thorpe’s ” this is set in Australia, and he’s their most famous swimmer –

Marlon and Lisa have hit upon a pretty cool way to get these dogs to learn how to swim. First, they run them under a sink to get used to how water feels on them. Then they fill up a bathtub and let them learn the motions of the doggie paddle while Marlon holds them in his hand – then he lets them go and they swim to the other side. It’s funny, since some of the pups try to drink the water –

I think my favorite part is when Marlon picks up one of the pups as he’s swimming and he keeps on doing his doggy paddle strokes in mid-air. That was just too adorable for words. He doesn’t even realize that he’s not in the water anymore. I can’t imagine Hulk jumping into that bathtub though – the impact would probably create a 1,000-foot tidal wave that would destroy entire countries.

Weren’t Hulk and his little pups both so adorable? I’ve never seen a pit bull that big. No wonder he’s used for breeding purposes – I want one of those pups, though. Have you had a dog close to being that big? Tell us all about it in the comments section and be sure to Like us on Pinterest – 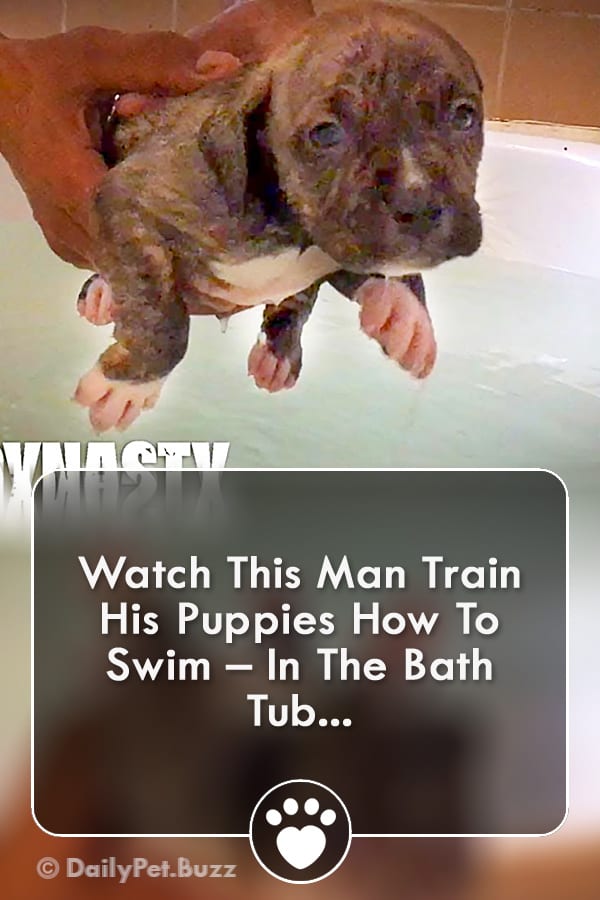