When we think of military dogs, our mental image of them tends to be of them on active duty, ever alert, sniffing out bombs and mines to protect their soldier partners. There’s a whole different side that we often ignore ” much like those of veterans ” that of what their post-service life is like. The image of the warrior going into their twilight years is foreign to many. It’s a shame, since these dogs deserve as much recognition not only during their life, but beyond it. One woman wanted her dog recognized and it took a long, winding path to get there.

The story begins with a war dog named Max. This canine served his country well, but he was eventually reassigned to civilian duty after he had flunked his re-certification. The reason? He’d become ‘too nice’ . That’s as good a reason as any, so Max got a new mommy, a woman named Pam, and it looks like he will live out the rest of his days as a beloved pet. Then, as life can often do, a curveball is thrown.

Max goes to the vet and he gets a terrible diagnosis ” terminal illness and possibly three suffering months before he passes. Pam doesn’t want that and she opts to euthanize this sweet dog so he doesn’t suffer. That’s the right thing to do, especially for a dog who risked his life time and time again as a military dog. Now, here come the struggles to get him recognized as such. Pam wants him to have a military funeral – and she runs into a brick wall for a long time.

The military refuses to do so ” perhaps because he was not an active soldier and had been discharged. Whatever the reason, it still seems shortsighted and hardhearted. Pam is not deterred, though, and when the head of one military cemetery asked why she didn’t put him in a pet cemetery, she replied, ‘He wasn’t a pet. He was a soldier.’ Eventually, one nearby cemetery did allow her to have his ashes buried there with full honors. There’s even a War Dogs section there now.

It’s a shame that she had to fight so much, but the military is known for its red tape. Fortunately, she was able to eventually cut through it. What do you make of this? Let us know in the comments, and ‘Like’ us on Pinterest. 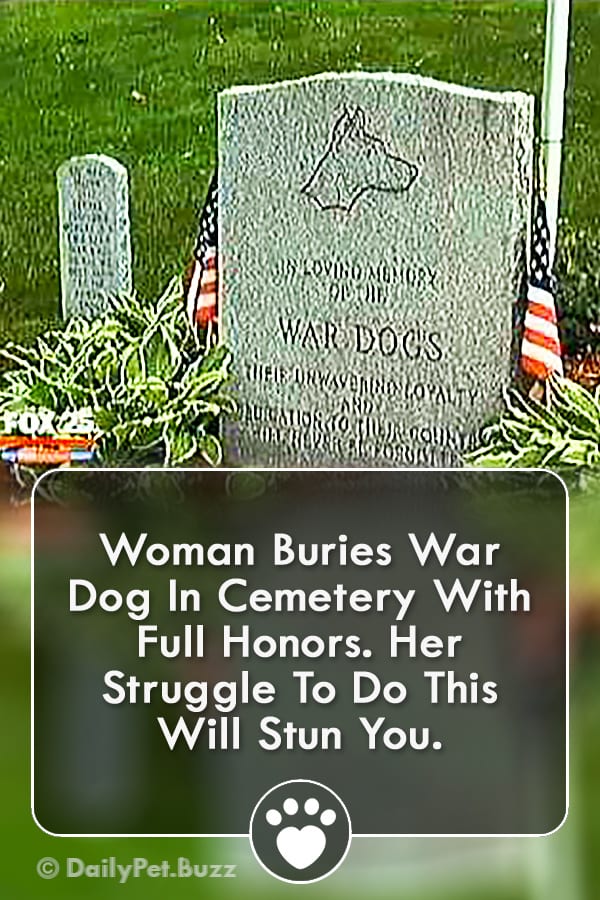