Animals can be jealous creatures. Especially if you have two of them. You should see my cats. My male cat is SUCH a jerk sometimes to my female one if she tries to come over when I’m petting him. There will be other times that he cuts her off if both are coming my way. They do NOT like to compromise at all. The same could be said of the Great Dane in this video.

All three of them are sitting in a living room watching TV. Dad’s got one of them, Romeo, right next to him and he’s lavishing him with rubs on the head and belly. The aptly-named Dinky is sitting on the sofa and he wants attention NOW. First, he just tries to nudge his way in, but Dad’s having absolutely none of it. He tells him that it’s Romeo’s turn. Well, Dinky does NOT like that answer one bit. He starts making grumbling noises that get gradually louder. Dad tries to reason with him ” which is a silly course of action since it’s a DOG. Finally, Dinky gives up and flops huffily on the sofa.

The first thing I found funny was that these two dogs were in a living room the size of a shoebox. They took up like two-thirds of the room. I hope that guy has a big yard because keeping these dogs cramped in a tiny apartment is not fair to them. Even so, it’s a hilarious scene. I hope the dogs don’t sleep on the bed with Dad because that would be even less space. Dad’s obviously been through this before with Dinky because he’s calm towards his protestations.

It just goes to show you that many animals of all sizes just want to be loved. Big, small, medium – they all just want someone to pet them and show them kindness. I couldn’t see either Dinky or Romeo being able to sit in his lap, though. I think they would crush his pelvis, at the very least. That scenario reminds me of a scene in ‘The Golden Girls’ when the elderly Sophia asks her daughter, Dorothy, to sit on her lap like old times. Not two seconds has passed when Sophia starts yelling, ‘BAD IDEA! BAD IDEA!’ I just hope that Dinky got some love later.

I’m just trying to figure out how to maximize my space so that I can even HAVE two Great Danes. What would you do? Leave a comment below! 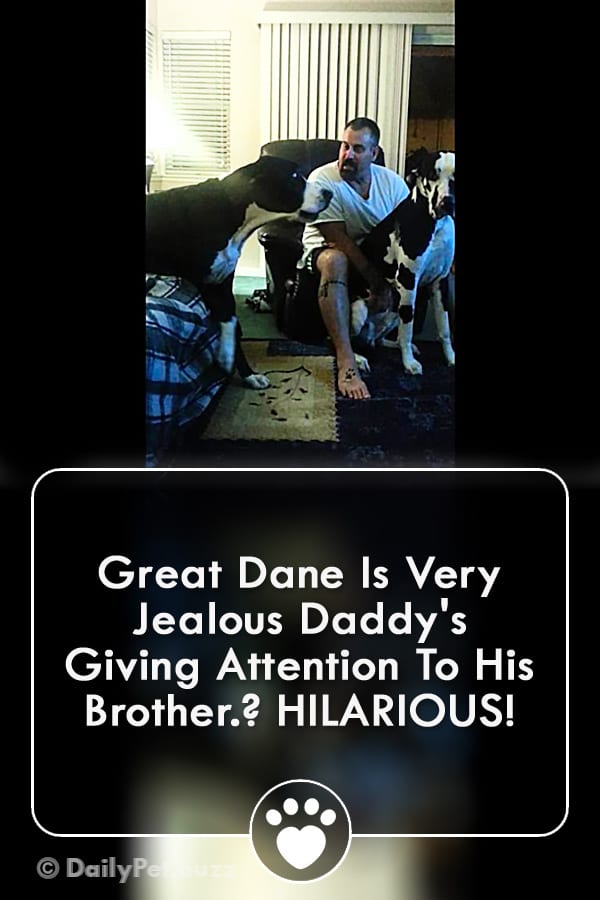