Kids can be extremely cruel sometimes, to each other, to their parents and ” in this case ” to this abandoned street dog. After she fell pregnant and gave birth to a litter, local children decided to do a horrible thing. They stole all her puppies. Except for one.

Some kind-hearted construction workers in the area thankfully did the right thing and notified Hope for Paws animal rescue centre, informing them of the plight of this poor animal and the only puppy she had left. Another kind soul had also converted a trash bin into a make-shift den for the unhappy creature, by placing a stick of wood to prop open a wheelie bin lid. But in spite of this thoughtful act, they were still in dire straits. Survival on the streets isn’t easy ”, especially for the young pup.

When the animal rescue team arrives, they see the dogs living in squalid conditions on a waste site, and they try to approach the pair to see what good they can do. As you can see in this incredible video, the mom simply looks so sheck-shocked ” she’s terrified that someone is going to come and take her last baby away.

It’s heartbreaking to see her reaction as the team try to go to work, cautiously edging closer and trying to gain some trust. Eventually managing to loop a safety leash over the mom’s head and coax her out of the bin ” with some loving words and doggy treats!

Slowly but surely, she allows the handlers to bring her out, and then gently reach in and lift the pup to safety too. They look so utterly confused and scared of the world around them ” and why wouldn’t they be? It’s dealt them a rough hand so far. Maybe by going with these two humans a better life is around the corner?

Anything is better than living in a bin on the streets, and it won’t leave a dry eye in the house as you see the two dogs together in the warmth and comfort of the care centre. The care team named the mom Zoe and the pup Meadow, and we’re pretty sure they’re going to have a much happier existence from now on. They’re much more playful and energetic ” and you can see their new-found joy simply by watching those wagging tales! Well done to Hope for Paws and all those animal rescue centres out there! 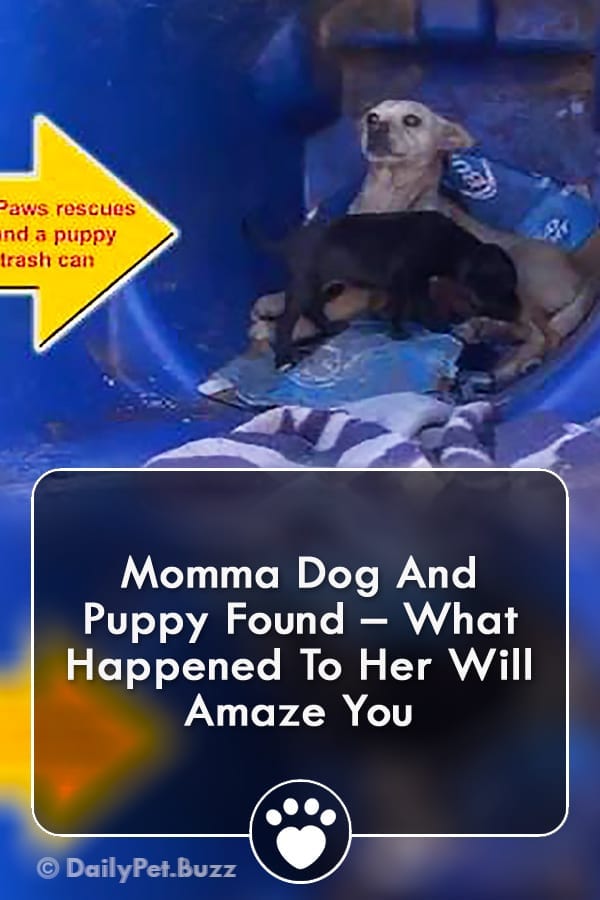