The first thing that we want when we’re sick is for someone to pamper us. Even the most stoic person wants someone nearby, as a comfort thing. It’s even better if they have someone to cuddle with them when they are feeling particularly blah. That’s what’s happening in this video that features an ailing pup and an attentive kitten that’s doing everything in his power to make things better.

We see Winston, a kitten, and Zeke, a puppy. Zeke has just been to the vet, where he got a whole bunch of vaccinations. This took a lot out of him, and he’s lying there, knocked out cold. Winston realizes his buddy is not up to snuff, so he cuddles with him, licks him and tries to use his body temperature to keep him warm, since Zeke might be feeling the chills as he rests. It’s an admirable effort from the kitten.

Winston is doing his best to comfort Zeke. He knows he’s not feeling well, so he’s licking Zeke, who might also be battling a bit of a fever. My cats do that to my son when he’s feeling a bit sick, so it’s not surprising that this instinct is ingrained in Winston. Poor Zeke is oblivious to this, being completely zonked out. If Winston were a mischievous sort, he would have done things like draw funny mustaches on Zeke’s face with permanent marker.

I hope that zeke woke up to find Winston resting by his side and realized that his buddy had tried to comfort him this whole time. It’s things like this, especially at a young age that can curtail the whole cat/dog enmity thing. They realize that they are great friends and don’t need to be mortal enemies. It’s too bad that they can’t do a PSA for other dogs and cats: ‘Yo, I’m Zeke and this is Winston. I’m a dog and as you can see, he’s a cat. We’ve been longtime buds and we just wanna say that dogs and cats CAN get along. Peace.’

This was one of the sweetest videos that I’ve seen in a long time. What did you think of it? We’d love to hear your thoughts in the comments section. Also, please ‘Like’ us on Pinterest! 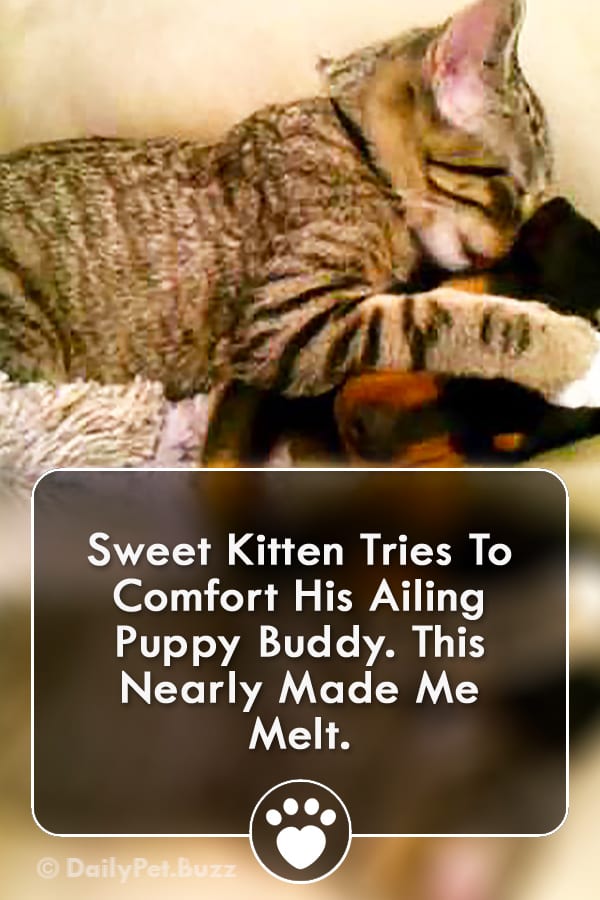