Giving a dog medicine is one of life’s eternal struggles. I’m sure even ancient Romans had their difficulties. ‘LOOK. IF YOU DO NOT LET ME PUT THIS LEECH ON YOU, I WILL SEND YOU TO THE GLADIATORS!’ But there are some times that the struggle can almost be comical. Those are the times when you look back at them and laugh. In the case of this video that stars a dog named Denver, you can chuckle while it’s happening.

Denver is NOT in the mood to take her medicine. Daddy shows her the bottle and she does NOT react well. She scrunches up her face in what looks like a half-snarl, half-look of disgust. It’s hilarious to look at. No matter how long he holds it in front of her, she resists. I guess eventually he got her to take it, but it’s not evident in this video. She’s so cute when she gets like this. Even the dad is chuckling.

We don’t see the actual struggle when it comes to giving medicine. It can be so annoying, no matter the type of medicine. My miniature schnauzer was so adept at hiding a pill in the side of her mouth that we had to stuff it in some food that she liked. I still have the claw marks from trying to put a syringe in my cat’s mouth. That was not happening. Who knows what happened with Denver after this ?

Hopefully she took the medicine, since we need to see a lot more Denver videos. She’s so expressive. That makes her unique among other dogs. She has a personality that just shines through on video. Even her daddy loves her when she’s acting up. Then again, judging by the number of views these videos get, he must get the camera ready whenever it seems like she’s going to make that face.

We’ve seen Denver before. What an expressive mug. My cats just scratch me if they don’t want to take their medicine. What have your pets done to avoid this? Leave a comment! 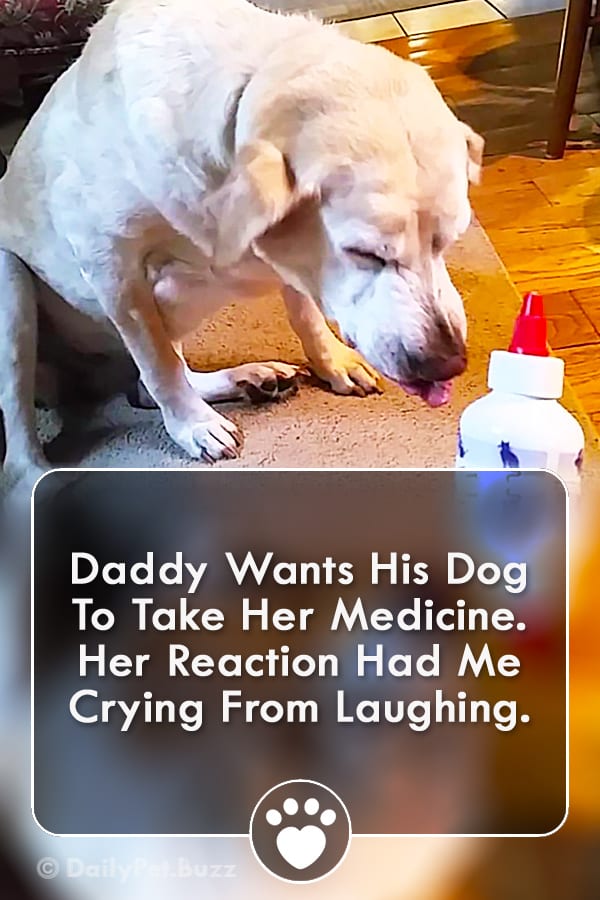