I have two cats. My male cat is by far the most annoying out of the two. When it’s getting close to dinner time in his head, he will do EVERYTHING in his power to get me to get up and feed them. If I’m sitting at my desk, writing like I am now, he’ll jump behind me and then sit on the back of the chair leaning against me. Other times he will leap onto my lap, like if I’m on the sofa watching TV. The female cat just sits there and meows a lot. The dog that appears in this video is even more persistent than my cats combined.

We see this dog’s daddy park himself on the sofa. He’s got ‘Star Wars: A New Hope’ , aka the first Star Wars that came out in 1977, cued up on his screen. It’s going to be a great night ” Luke Skywalker, Darth Vader, Obi Wan Kenobi, Han Solo, Princess Leia – and who can forget CP30 and R2D2? Well, someone else has other plans – a St. Bernard named Shasta. She wants her daddy’s attention and she wants it NOW. There’s an amusing text crawl at the beginning of the video like how the Star Wars movies do it.

Her first course of action is putting her paws on the sofa, trying to block her daddy’s view of the TV. He’s not fazed, pushing her aside. Then she puts those paws on his chest and licks his face. No dice. Next, she climbs onto the sofa. Now, this is a big dog -she’s not a petite little chihuahua who can daintily leap onto someone’s lap. No – the sofa seems to shake a bit when she lands. She puts her front paws on his chest. He wants to watch the movie.

Eventually, she gets tired and lays down with her paws on his chest. Several minutes later, she’s falling asleep. All this effort and she’s tired? What a waste of time. Still, it’s good bonding time for the two of them, even though the daddy is concentrating on the movie. She falls asleep and eventually, she wakes up and moves to a Laz-E-Boy type recliner. Daddy can watch the movie now in peace, but he has to go through this every day.

What’s the weirdest ritual that you have to go through nightly with your pet? Let us know in the comments. Also, please ‘Like’ us on Pinterest. 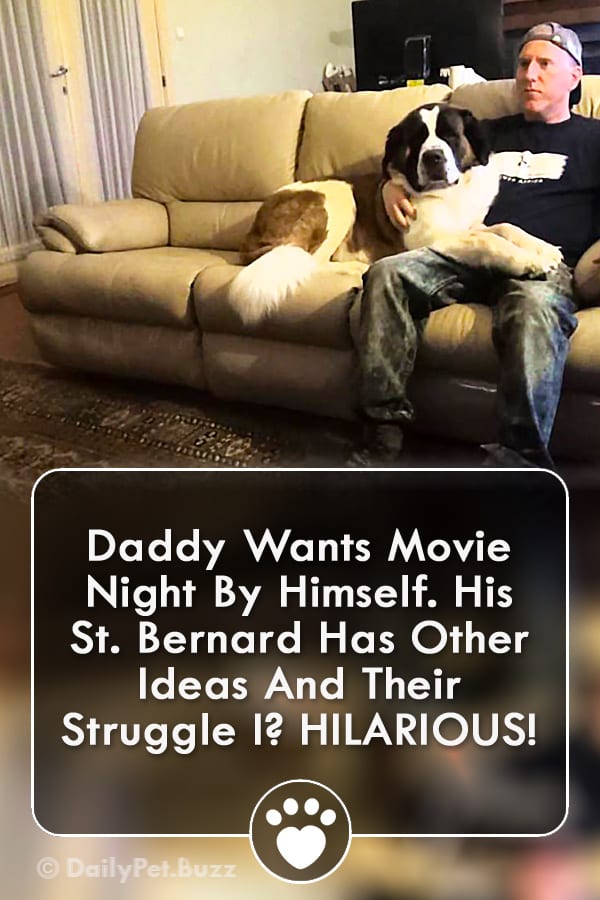