A sad fact of having a police officer for a spouse, a father, a daughter, or any other family member means that there’s always the worry that something might happen to them. Sure, there are some who might spend all their time behind a desk, but the main concern is for those who patrol the streets or highways. They never know what might go through another person’s mind when they wake up that morning – with tragic results sometimes. One person tried to honor the fallen in a special way of hers – as shown in this video.

Tracey McMenamy is the wife of a police officer and she knows very well how nerve-wracking it can be each day when her husband goes out the door to work. Unfortunately, 16 families saw their father or mother never come back in the door in 2015. McMenamy, whose foster dog gave birth to a litter of 10 puppies, did her best to pay tribute to those fallen ” she named the puppies after them.

The best news was that the family of one of the officers who was killed in the line of duty was adopting the dog that bore his namesake. That’s one way of carrying his memory with them. Hopefully, they will see a little bit of him in the dog’s eyes when he barks. It’s not much, but grieving families take everything that they can possibly get – and who can blame them? Thank goodness for McMenamy and her kind heart.

You can imagine that the spirit of these fallen officers are living on in the bodies of these little puppies ” who will grow to be big dogs. The sobering fact was that 10 puppies were not enough to be named after all the officers. I hope that smaller litters are needed each year, possibly down to one or two puppies at most. Who knows if we’ll ever be able to achieve that level, but it’s always good to hope.

What a nice thing she’s doing. Do you agree? We’d love to hear your thoughts in the comments section ” be civil though. Also, please ‘Like’ us on Pinterest. 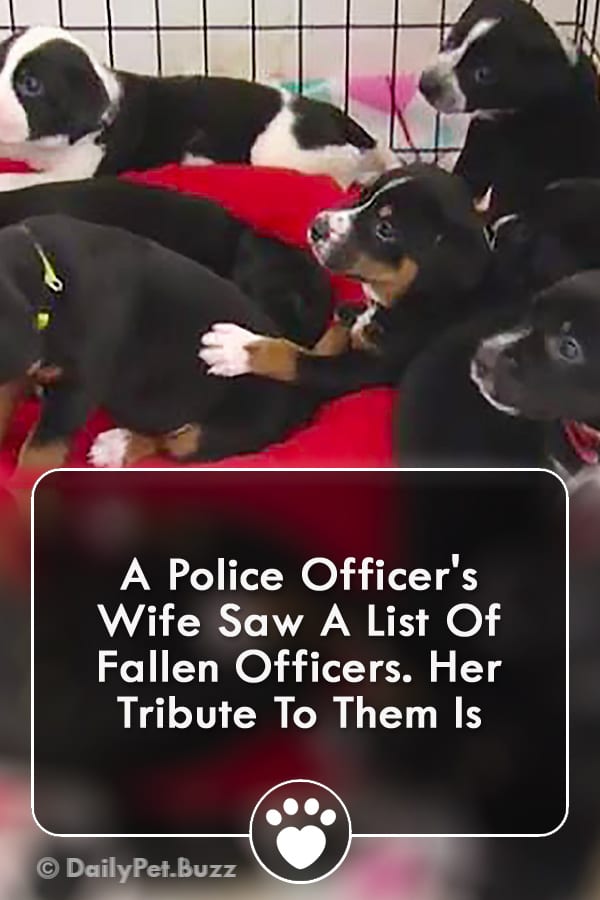