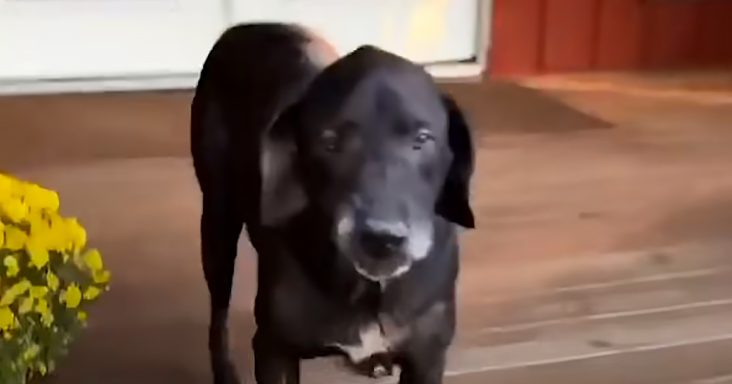 Zach is surprised when he sees a dog on the porch, but he is also relieved because he first thought he saw a bear. He texted Libby to say that there was a massive dog on her mom’s porch.

The stray dog was wagging his tail when Zach got close. Zach saw that the dog was happy but not in good health. They were on a 200-acre property in Arkansas with no neighbors.

Libby realized the best thing they could do was take in the dog because he needed help. Zach gave him a bath, and they named him Turbo. He was grateful and well-behaved.

Turbo was extremely dehydrated and disoriented when they first saw him. Zach could tell that Turbo has some mobility issues. They took him to the vet and found out he was around 8 years old.

Zach and Libby did their best to find out if anyone was looking for Turbo. After determining that no one would claim him, they decided to keep him with them.

They had another dog named Ava that gave Turbo a lot of sass in the beginning. But after a while, they became good friends. Once Turbo started his medications, his condition immediately improved.

Turbo was able to run with Ava and keep up with her, which was a good sign. They love his attitude, and he is a sweet, fun, precious dog that came to visit and never left.