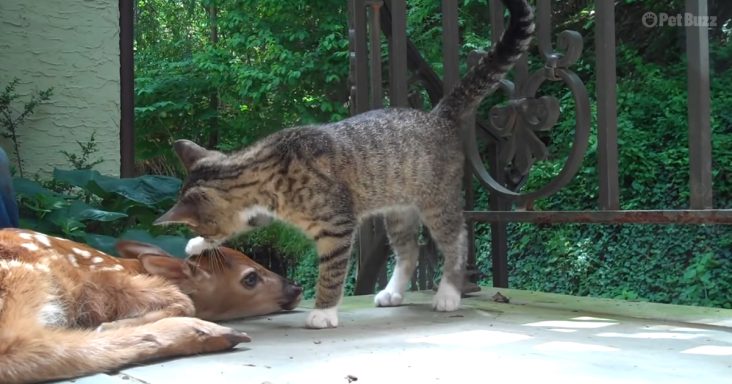 Miro, the kitten, was jumping with excitement when they found a baby deer on the front porch. The fawn was lying on the ground very still, and his eyes were wide open.

A natural defense mechanism for young deers is to play dead. With his mother nowhere near, the deer tried to stay as still as possible. Obviously, Miro did not know this.

The playful kitten started to touch and hop around the fawn. Miro was probably wondering why his new friend wasn’t doing anything. Even if the deer was young, he was still bigger than Miro.

No matter what Miro did, the deer didn’t move. The baby was waiting for his mother to return. Miro was energetic but still gentle with the wild animal.

It was a clear day outside, and the forest around them was green and teeming with life. The sounds of birds chirping filled the air, and Miro wouldn’t leave the deer alone.

Meanwhile, the humans who lived in the house were wondering where the fawn’s mother was. They made sure that nothing happened to the baby, and Miro kept watching as well.

It isn’t seen in this footage, but they eventually help the fawn get up and walk back into the forest to be reunited with his mother.