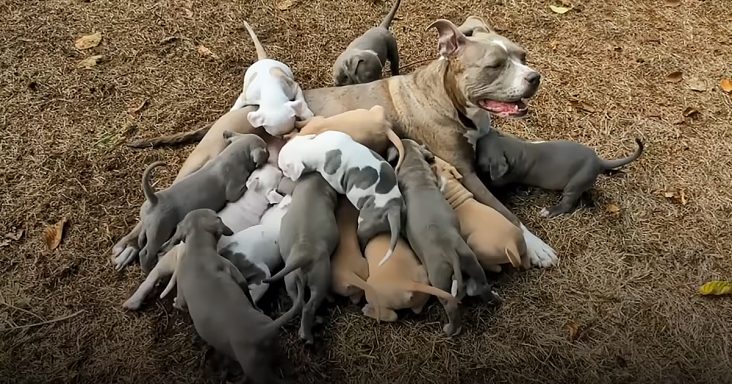 Jesse and Tara were in for a surprise when they chose to foster a dog named Kaya. They saved Kaya from a shelter when she was about to be put down because no one would adopt her.

Kaya’s ribs were showing, and they wanted to feed her well at the farm. She started to put on weight, and her belly grew big really quickly. Jesse was worried that he was overfeeding her.

They took her to the vet, and it turned out she was pregnant. Tara thought that she would have a litter with an average quantity of seven to eight puppies.

Kaya was huge when she was about to give birth, which made her quite tired most of the time. She rolled in the grass, and it seemed to ease her back.

It was early in the morning when she went into labor, and they thought she would be finished by dinner. Two and a half days later, there were fifteen newborn puppies.

Jesse and Tara thought that Kaya was undoubtedly done at that point. Then one more puppy was born. They took care of the puppies in shifts and called them little beans.

After 9 weeks, the puppies were adopted, and they decided to adopt Kaya and one of her puppies named Sefina. They ended up saving 16 lives after deciding to foster one dog.