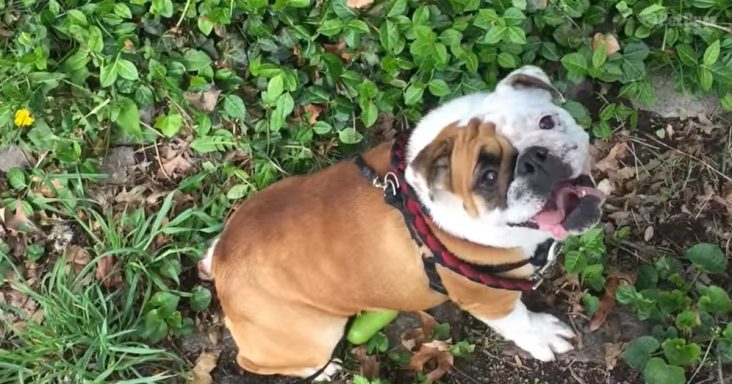 A British Bulldog named Juju has become an internet superstar thanks to his adorable antics that were caught on camera by his human.

In the video, we see him rolling down a small hill several times and every time he reaches the bottom, he looks up at his owner in the most endearing way.

His enthusiastic run back up the hill is also very hard to resist. He looks so much like a human child discovering a hill for the first time.

Juju even has his own Youtube channel called Juju the English Bulldog. The channel has only this on video and a few hundred subscribers, but somehow this video managed to rack up over 370K views!

The American Kennel Club describes them as “equable and kind, resolute, and courageous (not vicious or aggressive), and demeanor should be a pacifist and dignified.”

They get along very well with children and other pets making them the fifth most popular pure breed for family pets according to the American Kennel Club. Their medium-sized build also makes them a great pet for people who live in cities since they do not require too much space to be comfortable.

Bulldogs have been unofficially named a national British icon for their courage, grit, and determination.