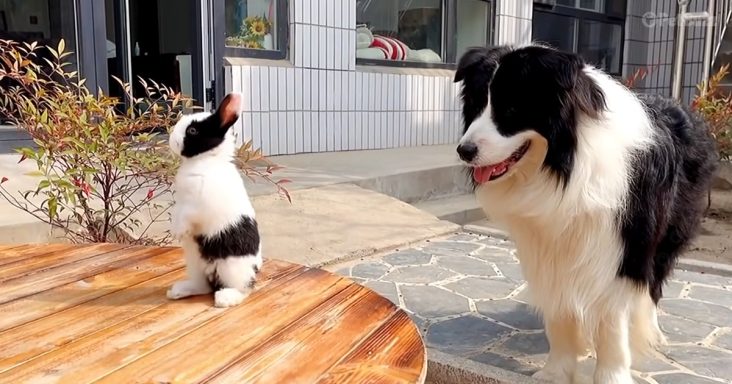 Animals never fall short of surprises. A dog establishing a solid bond with a rabbit is probably one of the weirdest things anyone can think of. Remember, dogs are naturally known for their predatory habits.

Conversely, rabbits are known for their shyness and may die of fright. Though adept, rabbits may develop heart attacks and eventual death when exposed to loud sounds, loud dog barks, and cat meows.

However, some dog breeds like the Border Collies won’t bother spending hours with family bunnies as long as they are trained. Then, they’ll take up the role of protectors instead of preying over your little rabbit.

Meet Bianmu, the Border Collie who couldn’t hold his joy when he met Tutu, the bunny. Bianmu’s love for Tutu came when he realized that the small bunny had a resembling fur color.

Tutu’s black and white spots had a remarkable resemblance with Bianmu’s furry coat. Looking at the two from a distance, one would think that Tutu is either Bianmu’s brother or pup.

Bianmu spent hours watching after Tutu, and at times, encouraging the small bunny to get out of the cage and play. Bianmu seemed very relaxed and overly protective any time he was around Tutu.

Bianmu would do anything to ensure Tutu got the comfort he desired. It is heartwarming to see how the pooch remained patient as he waited for his bunny brother to make his small leaps and the way he allowed Tutu to sleep on his furry body without fear.