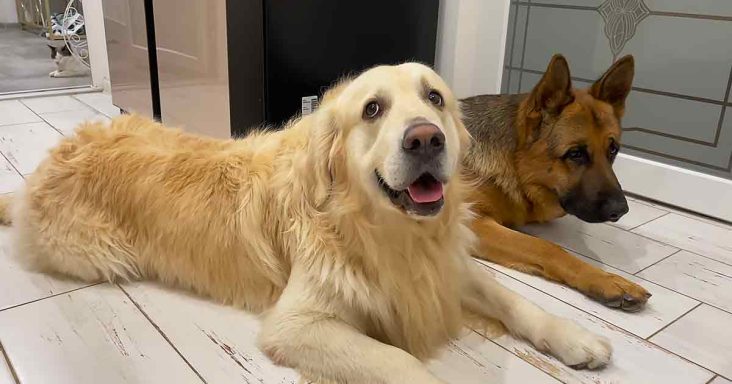 Bailey, the Golden Retriever, loves to hang out with his excellent friend Rocky, the German Shepherd. The two big dogs are gentle giants that take up a lot of space.

When they first meet up, Bailey is sitting on a couch, and Rocky walks up to greet him. Then they playfully and gently bite at each other’s faces. Neither of them hurt each other.

It is a sunny day, and while Bailey is relaxing on the couch, Rocky cannot join him because there isn’t enough space for the both of them.

The two massive canines move to a more enormous couch, and Bailey hops on top first. Rocky follows suit, and the two of them get pretty rowdy. They don’t push each other off, but they wrestle with each other.

Rocky jumps off and back on top of the couch every now and then. Both Bailey and Rocky are happily wagging their tails while they continue playing.

After some time, the two energetic dogs need to take a break. They lie down beside each other, and a moment of peace is shared between them.

Even when a ball rolls in front of them, they don’t chase it. Rocky and Bailey merely watch the noisy toy pass by, and there is a cat in front of them. They stay still after a whole day of fun.