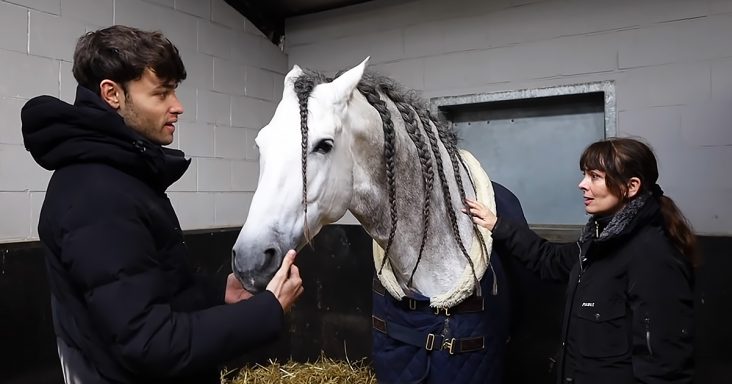 Matt Harcnacke invited horse psychic, Symone, to speak to his stallion, Emporio. Symone introduced herself as an animal communicator who works telepathically to talk and heal in a single session.

Emporio has been with Matt since he was three years old, and Matt didn’t tell Symone much else so she could learn on her own. She begins by asking Emporio for permission to talk with him.

Symone doesn’t usually do personal visits, so it was a big deal that she came to meet with Emporio. Matt stood and watched with fascination as Symone communicated Emporio’s feelings.

Emporio was worried about having to leave because other horses were departing. Matt assured Emporio that he would stay with him forever. Different people have wanted Emporio, but Matt always said no.

Matt asked a few questions that Symone gave to Emporio, and she translated his response back to Matt. Emporio was a proud horse who loved to work hard.

He likes attention and admiration and wanted to take their training to the next level. Matt agreed and didn’t let other people ride Emporio even when he was away. They had a special bond.

It was an eye-opening session for Matt, and he wanted to keep in mind what they discussed. He was always taking care of the physical needs of his horses, but the mental condition was just as critical.