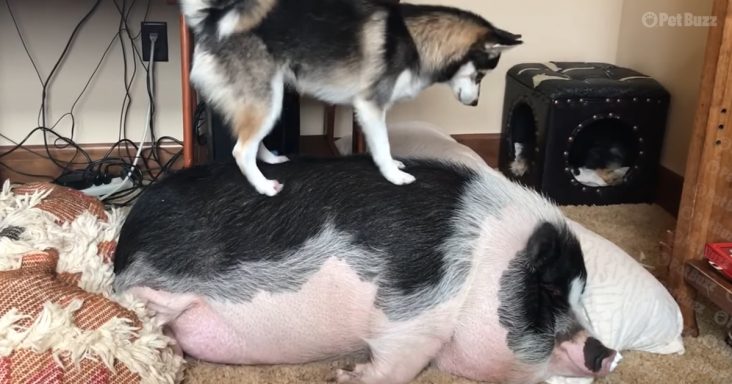 It was a quiet day when a playful husky was looking for someone to hang out with. He found that his friend was sleeping comfortably on the soft floor with a pillow under his head.

His friend of course was an enormous pig twice his size. It was easy enough for the husky to stand up on his body with room to spare. He stared down at his slumbering friend.

The pig would not wake up, but instead of leaving him alone, the husky had a better idea. There was no time to sleep, he needed to get his friend to play with him.

So he jumped down from the pig’s body and landed gracefully in front of him and began to growl then bark. There was absolutely no reaction from his friend.

When his lovely singing didn’t work the husky tried a different method that would certainly disturb the pig’s sleep well enough. He started shaking him as much as he could.

The paws of the husky repeatedly pushed off the pig’s massive body, he was nearly there. Then suddenly the pig’s eyes opened, and even though he was expecting it the husky ran away quickly.

He stood in the door frame watching the pig walk around the room. The husky was definitely hoping his friend would not realize it was him who disturbed his slumber.